COMMENTARY ON THE GOSPEL ACCORDING TO LUKE

The evangelist Luke, in the second chapter of his Gospel, records certain historical events connected with the mystery of the incarnation of God’s Son. This is inexplicable to the human mind and incomprehensible to human reason. The study of these events helps us to approach the fact of the incarnation, to delve in its meaning, to reap its great gifts.

2,1. Ἐγένετο δὲ ἐν ταῖς ἡμέραις ἐκείναις ἐξῆλθε δόγμα παρὰ Καίσαρος Αὐγούστου ἀπογράφεσθαι πᾶσαν τὴν οἰκουμένην.
2:1 It came to pass in those days that a decree went out from Caesar Augustus that all the world should be enrolled.

In the synoptic evangelists the verb "ἐγένετο" at the beginning of a paragraph means an introduction to a new cycle of narratives, which are not connected in time and place with those that preceded it.
"The fullness of the time" (Ga 4:4) had come “in those days”. The days prescribed in Daniel’s prophecy (9:21-27) had been fulfilled. The various religions were literally bankrupt, philosophy was unable to offer redemption and political power was corrupt. There was no longer any time for postponement or waiting; the world was as much in need of salvation as ever but at the same time was as ready as ever; the world was hosting in those days the most distinguished woman of all the ages (see comments on 1:28). Moreover, after Octavian's victory over Marc Antony at Actium in September 31 BC, which marked the end of the civil wars in Rome and the beginning of the imperial period, the famous Roman peace (Pax Romana) prevailed everywhere. In this historical context, during the monarchy of Octavian (31 BC - 14 AD), God found the most suitable conditions for the realization of his plan: a unified administration, the Roman one; a suitable language, Greek; a true religion, Judaism. It is aptly chanted in the doxastic of the (stichera) verses of the Christmas Eve Vespers; “When Augustus became supreme ruler of the world, the many kingdoms among the people came to an end. Likewise, when You became Incarnate of the Immaculate One, the worship of many gods had to cease. The cities came under a universal power, and the Gentiles believed in one supreme Divinity. Nations were registered in the name of Caesar Augustus, and we, the faithful, were registered in your divine name, O Incarnate One. O Lord, great is your mercy; glory to You!”
The expression “a decree went out” means "an edict was issued". This particular decree (Latin indictio) stipulated the beginning of the census. The Romans, as an organized state, took a census every five years. When they conquered many peoples and became a vast empire, for practical reasons they tripled the interval and made it fifteen years.
The decree demanded a census of the whole world i.e., it ordered a world census. The first world censuses took place during the reign of Octavian Augustus, because he was the first monarch of the entire known world, which stretched around the Mediterranean. The Roman emperors were often titled as "rulers of the world" in inscriptions.
The name-title Caesar indicates Octavian's descent from the famous ancient Roman family known by that name. Augustus means "Respected"; it was attributed to Octavian as an exceptional title of honour and subsequently prevailed as his first name.

2,2. Αὕτη ἡ ἀπογραφὴ πρώτη ἐγένετο ἡγεμονεύοντος τῆς Συρίας Κυρηνίου.
2:2 This was the first census, when Quirinius was governor of Syria.

The Roman state was divided into large geographical divisions; Syria was one such division, which included Palestine.
The census mentioned here was taken when Sentius Saturninus was ruler of Syria. However, it was connected with the name of Quirinius, because it was under his supervision as a military ruler. The verb "ἡγεμονεύοντος" generally means any office held (cf. Lk 3:1). The census was described as the first “when Quirinius was governor of Syria”, because it was followed by a second, which Luke mentions in the book of Acts (5:37), when Quirinius had succeeded Saturninus as ruler of Syria.

2,3. Καὶ ἐπορεύοντο πάντες ἀπογράφεσθαι, ἕκαστος εἰς τὴν ἰδίαν πόλιν.
2:3 And all went to be enrolled, every one into his own city.

The imperial decree was to be obeyed by “all”, all the subjects of the Roman empire. The Roman orders were strict. Any delay or indifference received an exemplary punishment. There were no exceptions.
The Romans, in order to avoid administrative difficulties and conflicts with the sensitivity of the peoples they had conquered, took advantage of some of their customs. Thus, among the Jews, who were careful to preserve their genealogies, the census was taken by line of descent. All the Jews left the cities, where they lived, and went to take their census in their “own city”, the place of origin of their ancestors.

2,4-5. Ἀνέβη δὲ καὶ Ἰωσὴφ ἀπὸ τῆς Γαλιλαίας ἐκ πόλεως Ναζαρὲτ εἰς τὴν Ἰουδαίαν εἰς πόλιν Δαυΐδ, ἥτις καλεῖται Βηθλεέμ, διὰ τὸ εἶναι αὐτὸν ἐξ οἴκου καὶ πατριᾶς Δαυΐδ, ἀπογράψασθαι σὺν Μαριὰμ τῇ μεμνηστευμένῃ αὐτῷ γυναικί, οὔσῃ ἐγκύῳ.
2:4-5 So Joseph went up from Galilee, from the town of Nazareth, to Judaea, to David's town which is called Bethlehem, because he was of the house and lineage of David, to be enrolled together with Mary, his fiancée who was pregnant.

Joseph and the virgin Mary were among the multitude that set out for the census. They travelled from Nazareth of Galilee where they dwelt to Bethlehem of Judea, because they descended from Judah’s tribe and specifically from David’s line (cf. Lk 1:27). Bethlehem, a small pastoral district about two hours' walk from Jerusalem, is referred to as David’s city, because it was David’s birthplace (cf. 1 Sam 16:1, 18). Its name means "house of bread". It is very expressive and gives a chance for preaching about the place where the "bread of life" was offered to mankind (Jn 6:35). Divine providence took care that, on the occasion of the census, Mary and Joseph should find themselves in Bethlehem at the time of childbirth, where according to the explicit prophecy of Micah (5:1), the Messiah would be born.
Although Judea extended south of Galilee, in the Bible the verb "went up" was used for the journey from Galilee to Judea, because the latter was at a higher altitude.
For the expression "his fiancée" see comments on 1:27.
Lord’s incarnation is connected with a series of successive humiliations and persecutions. Jesus had not yet been born and was about to undergo the first humiliation, the humiliation of the census. To understand the deep meaning of this humiliation, we must be aware of the political and civil status of those days. For free peoples, the census was not simply a count of the population of a country. Its purpose was purely economic. The ancient rulers, in order to be informed about the taxes they could collect from each subject, occasionally appointed special rulers surrounded by hired people who recorded all the property and annual income of their subjects. In this way they calculated what taxes each person had to pay.
But for enslaved peoples, such as the Israelites at the time of Christ's birth, the census had a very humiliating meaning. The enslaved were considered the property of their conquerors. The sovereign ruler or emperor recorded them down, along with their houses, their fields, their animals, as objects of his personal property. However, because he could not manage all these, so he forced them to buy themselves and the members of their families, paying for each person (per head) a slave’s price and then required them to rent their own fields and animals, so that they could work with them as if they were their own. The price of their head was the so-called body tax or the head tax; the rent they paid for their land was the land tax. In addition, they paid all the taxes of the free citizens.
The census ordered by Augustus Caesar took place at the same time with Christ’s birth. The incarnated God was born as a slave, while the counting of the slaves was still going on. His first obligation in his life was to buy himself for one year. What a humiliation! While he was the king of the kings of the world, apparently Augustus held that position; and he was born as a possession and part of Augustus' property. Although Jesus was the true king of Israel as David’s son; The genuineness of his descent from David was evident from the census’ records which forced him to take his census in David’s city, Bethlehem; yet another person as a tyrant sat at the helm of Israel, Herod the Edomite. He was neither David’s son nor even an Israelite. When the true king of the world was born, Augustus recorded him as his possession, and Herod hunted him as his victim, wanting to slay him.
The fact of the Lord's census recording is particularly moving to the hymn writers of our Church. Behind the census of the Roman Empire, they see another side, a spiritual one. Through the wonderful contrasts and rich juxtapositions, the Christmas hymns approach its deeper meaning: "Nations were recorded in the name of Caesar Augustus, and we, the faithful, were registered in your divine name, O Incarnate One...". Christ, the world ruler, was recorded as Augustus’ slave, to write us down in the book of life, and even under his own name as Christians!
Miserable were those who were recorded as Caesar Augustus’ servants; blessed are those who are recorded as Jesus Christ’s servants. Wretched were those who paid body-tax to the monarch Augustus; great happiness bestowed those who were redeemed at a high price by the eternal monarch Jesus’ blood and pay him a tribute of faith through repentance and obedience to his holy will. 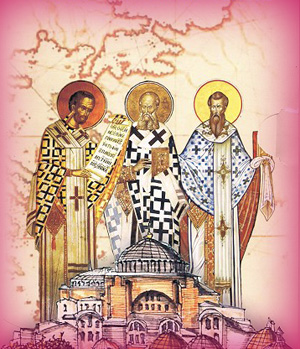