THE REAL MEANING OF CHRISTMAS IN FIVE QUESTIONS 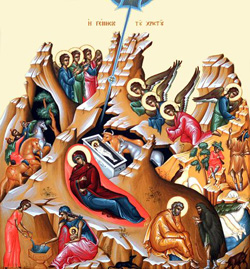 Christmas is coming and lots of Christians desire to have a deep experience of this great mystery, God’s Incarnation. People usually think of Jesus’ birth as an old, romantic story. Consequently, they do not benefit from it in order to make spiritual progress. There are some questions through which we can discover the only truth in the Holy Bible. These will help us to be fully informed about the Incarnation.

The first question is: Who was born?

The second question refers to the time of Jesus’ birth: When was he born?

The third question has to do with a very touching and sensitive issue concerning the divine birth. Where was he born?

The fourth question is: How was He born?

The fifth question is: Why was He born? What is the purpose of this divine plan? In the Apostolic preaching there is always an emphasis on this purpose.

However, Jesus’ birth is not a past event. It is a personal fact for everyone. It is an event that is personally connected to each person.We need to look at these five questions, which we have already answered, in close relation to our own life.